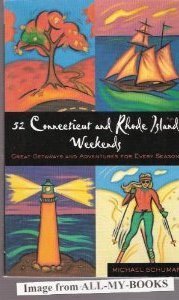 We stretched out on a beach under the sheltering mass of the 163-foot-high chalky cliffs known as Mohegan Bluffs, where we watched the waves lap the shore in a reassuring monotony.

There were no concession stands.

There were no boom boxes.

Just us, our peace of mind, the sky, the sun, the sand the waves.

The bluffs were a barrier, shielding us from the world's distractions. We had no radio--who wanted to hear the news?

This is Block Island.

If you desire hordes of humanity and funky shops, go to Provincetown. If you want beautiful people, where the men look like Richard Gere and the women like Julia Roberts, take the ferry to the Vineyard. There might be people who are beautiful on Block Island, but not the beautiful people.

The island is certainly not undiscovered. It is busy in summer, some areas of the island more so than others. The chamber of commerce estimates that about 15,000 visitors a day in July and August inhabit the island. Most crowded is Old Harbor, the commercial center where the ferries from the mainland dock. But you will run into joggers, roller bladers, bicyclers and motorists throughout the island. The chamber recommends that weekenders save the $40 or so that it costs to transport a car back and forth on the ferry by leaving their car behind. The island beckons bicyclers and there are plenty of places to rent a bike.

Those who prefer foot power are just as welcome. If you really need car transportation, taxicabs are available, and a couple of cab rides totals just a fraction of the cost of bringing your car on the ferry. The Victorian-era hotels and inns are vestiges of Block Island's lengthy history as a premier resort. People have been vacationing here for over a century and a half. A Block Island historian wrote, "The first hotel for boarders from abroad was opened in 1842 by Mr. Alfred Card, one hundred and eighty years from the first settlement by sixteen families. There Mr. Card 'set the first excursion table for boarders of pleasure' ever furnished on the Island."

Block Island's past can be further inspected at two lighthouses and a historical museum. The Southeast Light, atop Mohegan Bluffs, dates from 1875 and was moved about 240 feet back from the bluffs in the mid-1990s to prevent it from becoming a victim of eroded shorefront. It resembles a humble brick cottage with an attached lighthouse, like a garage on a suburban split-level house.

North Light is home to a maritime environmental center and museum and the museum at the Block Island Historical Society shows off vintage quilts, photographs and kitchen implements (including a huge cookie cutter). Wonder what you would have worn had you vacationed here 100 years ago? A slew of turn-of-the-century clothing is on view.

But those who come in summer want beaches, and there are 20 miles of public ones. The most visited are in the three-mile long stretch known as Crescent Beach, a group name for many numerous small ones. Included is the popular family-oriented Fred Benson Town Beach. Here you will find restrooms, showers, a snack bar and a place to rent umbrellas to ward off the sweltering summer sun. It is about a ten-minute long walk from the ferry dock.

For maximum exposure try the beach at Black Rock, at the island's southwest point. Nude bathing takes place here, despite the fact that it is not legal. Back Rock is also the surfers' top choice among beaches. Most of the island's ocean beaches are unnamed and can be found serendipitously. The water temperature is mild by New England standards, reaching a peak of 70 to 75 degrees. For even warmer water, try the inland beaches at Sachem Pond and Sands Pond where the temperatures can be five degrees hotter.

DASHING THROUGH THE SNOW

There are winter outdoor activities in New England for the non-athlete. Even in these days of cyberspace and cable television, when we can spend an entire winter weekend without leaving the house and still be entertained, many of us can't resist those mornings when one just wants to jump head first into a Currier and Ives lithograph.

Luckily, there are plenty of places to do something about those fuzzy feelings of nostalgia. Several enterprises in southern New England offer old fashioned sleigh rides over the river, through the woods, under a starry winter canopy or along the frosty mantle of a sugary white field.

Some of the following places will arrange a bonfire or snacks upon your return from the ride. Others are more basic. Many supply blankets, but it is a good idea to bring your own as an extra. A wool hat, gloves and boots are essentials in order to keep warm, regardless of whom you snuggle up next to. Jewelry is best kept at home; looking for a ring in heaps of snow is no fun. If you want to bring a wine flask, most places won't care. They just ask that behavior doesn't get out of hand. But it's best to ask in advance.

When snow is sparse, hayrides are usually substituted, and you are transported on wheels rather than runners. Whether that affects the mood of what you had in mind is up to you.

In 1901, an industrialist named Alfred Pope built a white Colonial revival mansion looking as luscious as a wedding cake in what was then rural Farmington, Connecticut. Inside he hung enough works by the most highly regarded artists of his era to fill any self-respecting museum. Nearly two centuries earlier, John Stanley, son of one of the town's founders, built a wood frame house in the colonial New England overhang style of architecture. It was still standing when Alfred Pope built his mansion, and it still stands today.

Spring might be the most inviting time to visit these homes. The gardens are blooming and the country--albeit on the outskirts of suburbia--is still sweet and young. Early in the spring, the trees and shrubs, such as the magnolias, flowering crab apple, and beautybush are busting out in blossoms at Hill-Stead. In May the daffodils are in bloom. In late spring, the gardens are a comforter of pink and white, with roses and peonies showing their colors.

Those who know gardens will be interested to hear that Hill-Stead's garden was designed by famed landscape architect Beatrix Farrand. The landscape outside the Hill-Stead would inspire any impressionist. It is on the inside that one can see the works of the actual artists. Hanging on the walls are the works of the greats, Monet, Manet, Degas as well as Whistler and Cassatt. Pope, born in 1842 in Maine, made his fortune as president of the Cleveland Malleable Iron Company. He became a serious art collector in the late 1880s, when impressionism was causing quite a stir over in Europe.