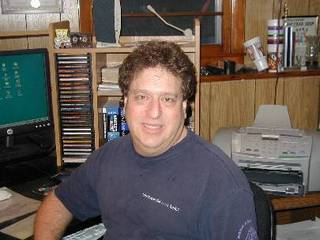 All I've ever wanted to do since the second grade is write because it's what I do best. If I was best at accounting or collecting garbage I'd be an accountant or a garbage collector.

I was born in West Hartford, Connecticut in 1953 in the lap of suburbia during the peak of the baby boom. I graduated from Syracuse University in 1975 and sick of the East Coast and upstate New York weather I headed west to graduate school. After earning an MFA in a two-year program at the University of Southern California I hung around Los Angeles for two more years. Missing the four seasons, I moved back east and found a little piece of Heaven in southwestern New Hampshire, where I live today.

Other than writing, the only jobs I have had include clerking in drug stores from Connecticut to California -- my dad was a pharmacist -- and grilling hot dogs in the Los Angeles Memorial Coliseum during football games. I heard a lot of great plays but didn’t see many.

I began writing professionally as soon as I graduated from college. My first published articles were for a publication devoted to major league baseball, a topic I chose to write about because I've been a baseball fanatic off and on since I was a child. But once the novelty wore off I found I didn't like sports writing. After a while I felt like a groupie chasing athletes around. Still, I wouldn’t mind taking a sports assignment now and then.

I switched to travel writing because I love seeing new places and because it's a lot easier getting interviews with people who are dying to talk. My travels have taken me to 49 of the 50 states and 21 countries.

This led into writing non-fiction, mainly biographies, for the young adult market. I’d rather write biographies for kids than adults. Kids are interested in reading about people they admire and adults want to hear about sex or greed -- or sex and greed.

So there you have it, a fairly dull life for a writer. No years toiling on an offshore oil rig, no tenure on a commune, no duration of 36 months in the Peace Corps.

So please judge me on my writing, not my mundane lifestyle.

Now, for a little self-promotion: I have written 46 published books in both the travel and young adult non-fiction genres, and over one thousand articles. My byline has appeared in over two dozen magazines (Yankee, History Channel Magazine, Touring America, Cobblestone, Americana, Wisconsin Trails, Georgia Magazine, Connecticut Magazine, Mississippi Magazine and Alabama Living, to name a few) and in over 200 newspaper travel sections.

Two of my young adult books have been named to the New York Public Library’s exclusive Books for the Teen-Age list: Elie Wiesel: Voice from the Holocaust and Martin Luther King, Jr.: Leader for Civil Rights.

And I have over the years won 14 NATJA (North American Travel Journalists Association) awards for excellence in travel journalism; 13 were for articles on travel destinations ranging from a profile of the resort town of Breckenridge, Colorado to the July 4 celebration at Old Sturbridge Village. The other was the grand prize for overall excellence for my book, 52 New York Weekends .

Who was Linus Maurer? He was a cartoonist friend of Charles Schulz, and the eponym of Schulz's famous young philosopher, Linus.

To the right are links to some of my travel features and excerpts from a few of my books. Click away and enjoy.