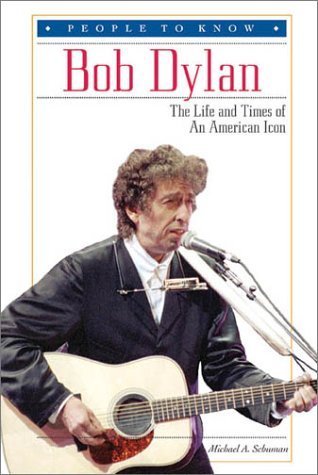 Bob Dylan: The Life and Times of an American Icon

He might have been a brash upstart in 1961, but over 40 years later Bob Dylan is a household name. His lyrics, his politics, his religious views and his activism have always made people, whether they like him or not, take notice. Whether viewed as a poet, a philosopher, a folkie, or a rocker, Dylan has transcended musical stardom and landed in the category of legend. This book examines Dylan’s life and work, including his frank political statements and commentaries on life and love. It guides the reader through the enigmatic life of this ever-popular and unforgettable entertainer.

Over the years, Bob’s performance on that July day at the Newport Folk Festival has become a folk tale in itself. What really happened has never been clear. Even those in attendance have not agreed on what took place.

The most-told story of July 25, 1965 goes like this. Dylan came on stage sporting not his usual acoustic guitar, but an electric one and with a rock band behind him. He played three songs. The first was a pro-labor tune he wrote called “Maggie’s Farm.“ A chorus of boos was heard from the audience.

Dylan’s second and third songs were “Like A Rolling Stone” and “It Takes a Lot to Laugh, It Takes a Train to Cry.” The booing did not let up. In response, Dylan left the stage. He returned with an acoustic guitar and played two folk songs in the traditional manner. The audience then accepted him, after giving him a clear message that they would not allow him to ruin folk music by cheapening it.

But what really happened? A music historian named Sam Charters studied films and recordings of Dylan’s short electric set and insisted the only loud objections from audience members were about the quality of the sound system. Charters said, “There were no boos and the complaints weren’t about the music--My God, Dylan was the hottest thing going. The sound system at Newport was not set up properly for electric instruments, so people were yelling out because all they could hear was noise.”

Dylan’s organ player Al Kooper said years later that the audience booed because Dylan’s music set was too short. He griped, “We’ve read the untrue accounts for so many years.“ The person at the sound console, Paul Rothchild, was in charge of controlling the loudness of Dylan’s music. He recalled things a bit differently. “From my perspective, it seemed like everybody on my left wanted Dylan to get off the stage, everybody on my right wanted him to turn it up. And I did--I turned it up.”

Dylan was convinced the audience was booing him personally. According to Dylan, “...they certainly booed, I‘ll tell you that. You could hear it all over the place...I was kind of stunned. But I can‘t put anybody down for coming and booing. After all, they paid to get in. They could have been maybe a little quieter and not so persistent, though."

When Dylan came back onstage with his acoustic guitar, he sang one of his own compositions: “It’s All Over Now, Baby Blue.” Was he telling the audience that his period as a folk purist was all over?

According to Paul Rothchild, “To me, that night at Newport was as clear as crystal. It’s the end of one era and the beginning of another.”

Later that night, several Newport musicians had a get-together. Dylan sat alone, depressed. A singer named Maria Muldaur thought he might cheer up if she asked him to dance. The saddened Dylan replied with a strange response: “I would dance with you, Maria, but my hands are on fire.”