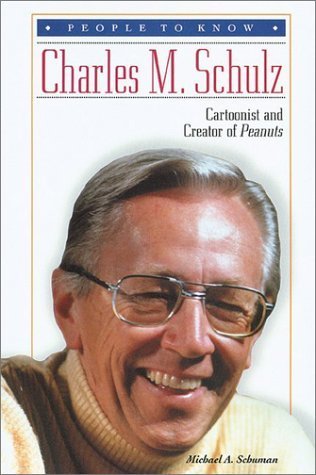 Charles Schulz never forgot the teasing and taunting of the school playground and he used those memories to create the most successful comic strip of all time. His friend and fellow cartoonist Cathy Guisewite said of Schulz, "When people saw all sorts of meanings in his work, he would always kind of roll his eyes and say he was just trying to meet his deadline. But I saw him as writing from the heart and soul. He created something millions of people could respond to in different ways. The whole spectrum of humanity could see something different in what he wrote. He depicted what were pure moments to him."

Schulz’s insight into human emotions and interrelationships, as seen through the eyes of children, gave him admiration from the world’s citizens. He was a humble man who shunned the labels put on him by others--philosopher, satirist, for example, and called himself simply a cartoonist.

This book offers older children and teenagers insight into the man’s life. They see how he grew from a gawky teenager who ate lunch alone at school into a dignified and respected commentator on the nature of the human spirit.

An excerpt follows: “What was it in Peanuts that drew adults like few other comic strips that featured children? For one thing, much of the humor was very subtle. That was a departure from heavy-handed, one-line gags and slapstick humor found in other comics of that day. For example, in one 1958 strip Charlie Brown told Violet how much he admired Linus. “He’s read Cinderella, Pinocchio, Snow White...all those books. And that isn’t the ONLY thing,” Charlie Brown added. “He can also discuss them intelligently." That could be viewed by adults as a sly put-down of people who brag about being well-read, but don’t back up their claims.

In some ways, the children were like mini-adults. No children around ages seven or eight worried about the meaning of life the way Charlie Brown did, or talked about great literature like Linus. These comments coming out of children’s mouths in some ways made them more profound than if adults were saying them.

Finally, many readers saw Peanuts as a satire about society. Child psychology was a growing field in the late 1950s. It was during that period Schulz first drew Lucy sitting at a stand offering “psychiatric help” for five cents, the way real children would have a lemonade stand. To social critics, Schulz was mocking so-called experts giving out their opinions on child psychology. And while these experts would charge expensive rates for their advice, Schulz seemed to be saying it was really worth about five cents.

Publicly, Schulz never claimed to be making statements about such adult topics as child psychology. He said he created Lucy’s psychiatric help stand simply because he thought it would be funny. Schulz declared, “The booth really was a take-off on the lemonade stands that appeared for years in other kid strips.”